Phil Andree set up his homestead near Edmonton, Alberta, Canada. He is typical of the tough, independent residents of the area. “We’re about 8 hours south of the Arctic Circle, he explained, and there’s not a whole lot between here and the North Pole.”

A grader operator in the oil fields by day, Phil runs a Norwood LumberMan MN26 sawmill evenings and weekends—often by electric lights— to stretch out the short winter days. “I’m up at 5:00, come home around 5:00 in the evening, have supper, then go out in the bush and cut lumber for an hour or two,” he explained. The evening I called Phil, he had just come in after such an evening of sawmilling in -20°C (-4°F) degree weather. “Yeah, this is where men are men and women are... well... scarce,” he laughed, “Who in their right mind would decide to settle down here and build a farm? It is brutal here— minus 50 degrees (-58°F) in February.”

“Everything is lumber and oil in these parts,” says Phil. A lot of sawmills cut rig mats for heavy equipment. They are 2x12s, 3 layers thick, ten feet wide, by forty feet long. “We make highways through the bush out of lumber so we can drive heavy equipment and tractor trailers back through there. Thousands of these pads get moved every day.” Cutting lumber for these “boardwalk” roads keep loggers and sawyers busy. But Phil had other plans for his Norwood sawmill.

“When I moved to Alberta, I figured I needed a sawmill for the lumber to build a workshop and barn for a lambing operation,” Phil explained. “I started out with the idea of building a mill myself, but decided to save time and buy one. I looked at the Norwood mills,” he continued, “I was impressed with the mill, and it was reasonably priced.” 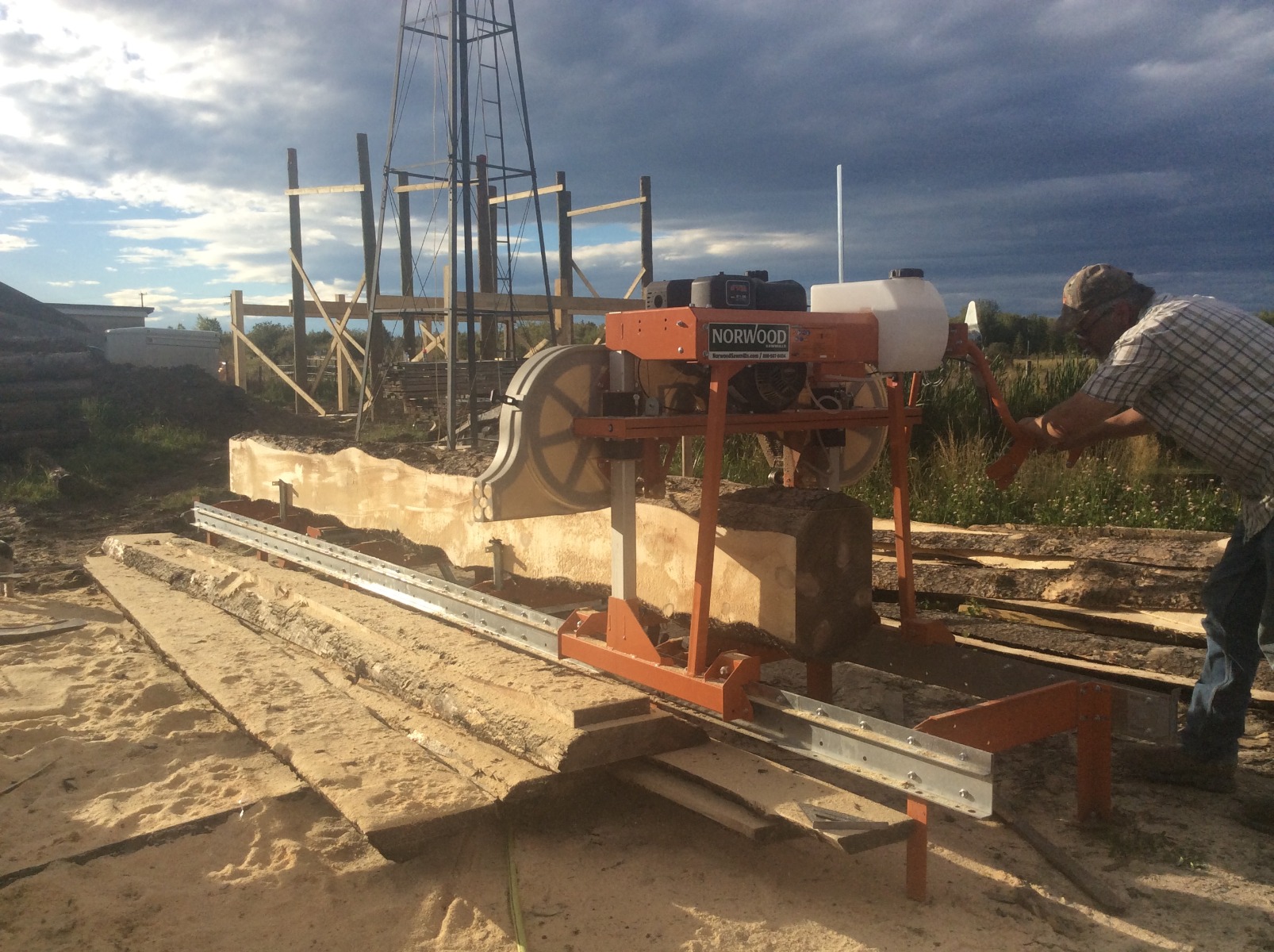 Putting a sawmill together in sub-freezing temperatures proved a challenge, and Phil says that he and his wife, Cindy, had to take frequent breaks to warm up. “I had my wife reading the instructions as I put it together so I wouldn’t screw up,” he recalled. “It was probably -20 (-4°F) or so when we assembled it, but everything went together.” Looking back, Phil says he wishes he had bought Norwood’s larger HD36 hydraulic sawmill. “Some of my logs really push the limits of the MN26,” he said.

Phil notes that the Briggs & Stratton engine stands up well to the rugged environment. “No matter how cold it is, I just pull the choke on, give it a pull or two, and it starts up every time,” he said. “With electric start, guys get spoiled,” he laughed. With the mill in place, Phil’s next task was to accumulate a supply of logs for his barn.

Free Logs! Salvaging Spruce Too Big for the Mechanical Harvesters

“We have excellent spruce in these parts,” Phil explained. “A lot of them are more than 100 feet tall, and over 30 inches in diameter at the base.” Loggers use mechanical harvesters that cut the trees, strip off the branches, and buck them to sixteen-foot lengths. “The logs that are too big for the local mills, they give to me. Free lumber!”

With his job as a grader operator, Phil says he knows where the good timber is, and his tenton trailer equipped with a grapple loader make short work of salvaging the oversize logs. “It takes me about an hour to get out to the bush, half hour to load up, then an hour back home,” he says.

“All my lumber is 16 feet long, between 25 and 30 inches diameter, the way it comes out of the bush,” Phil said, “My skid-steer will barely pick some of it up.” Phil says he has found milling to have a learning curve. “I’ve hit the log stops, but you just put on a new blade and away you go. Anything I broke, I did it by pushing it too hard,” he added.

Phil says that a sharp blade and a good flow of water/antifreeze are the keys to cutting frozen logs. When asked how cold it has to be before he’ll stay inside, he replied simply, “There’s no such thing as too cold. There’s too much work to get done. You just man up and do it. I run the sawmill, and Cindy keeps bringing me out coffee.” Cindy also took lots of pictures and videos, and the pictures with this article are to her credit.

The irony of using the smaller MN26 sawmill with a 13-horsepower motor to cut logs too big for the much larger commercial mills isn’t lost on Phil, and he uses the capability of his mill to good advantage. “Lots of times I had to cut a bit off to where I could get it through the throat, cutting right to the edge of the blade guides”, he said, “I spend a lot of nights cutting, but I get a lot of enjoyment milling all my own lumber.”

While he occasionally has help at the mill, Phil won’t let anyone else actually run it. Besides Cindy, Phil’s best helper is the equipment. “I’ll use my skid-steer and grapple to throw a log up on the mill and cut it down to 2 x 12s. Just keep going at it,” he said. The skid-steer also comes in handy when unloading sixteen-foot 10-inch beams off the mill. To handle oversized timber, “you have to have good support equipment, especially when you’re working by yourself,” he explained.

“I found a picture of the barn I wanted to build, and away I went,” Phil recalled, “I knew that I wanted heavy timbers in the barn. The beams are full 10-inch by 10-inch. All my lumber is true 2” by 12”, so when you look at my barn, you think it’s been there a hundred years. It’s oldschool. Really beefy.”

The 32-foot by 50-foot barn is unusual in Phil’s part of Alberta. “There aren’t that many big barns around here,” he explained, “People would rather cover their equipment than their animals.” Milling the lumber was just one of the challenges of the project. For example, the foundation posts had to be set seven feet deep just to get below the frost line. Positioning the posts and beams required occasional help, but the skid-steer and knuckle beam loader did all the heavy lifting. “I can’t believe the amount of lumber that went into my barn,” Phil exclaimed, “The barn siding alone ran 4,500 linear feet of 1x10s.”

The barn is an important part of Phil’s next business venture of raising lambs for meat. Between the frigid weather and predators (“wolves the size of horses”), the sheep stay in the barn year ‘round, which means he needs room for feed, as well as the livestock. “I store hay in the loft. I’ve got 600 square bales coming in tomorrow. The grain bins are in the loft, as well, and both hay and grain are gravity fed down to the feed troughs. Phil estimates that he stores about thirty tons of hay and grain in the loft, so those “beefy” posts and beams are there for more than appearance!

Even with his time and expense, Phil estimates that the Norwood MN26 sawmill has paid for itself twice, just building this barn. “I bet I’ve cut over $50,000 in lumber. I couldn’t have been able to afford the lumber without the mill,” Phil said, “If I were to do it again, I’d get a bigger mill, but I would get a Norwood. They’ve been really good.” Phil has more plans for his sawmill in the near future. “I’ve got another barn to build when this one’s done,” he said, “I’m probably going to sell this sawmill and get the larger HD36 with hydraulics.”

It’s a good thing that the summer days that far north are 18 hours long. Phil is going to need every moment!

Request your own DVD & Catalog Kit

Get an overview of our products and view Norwood sawmills and forestry equipment in action.
You prefer getting the electronic catalog for your phone or tablet, download it here.